Spoiler Warning: There’s a chance of spoilers for any of these three books/shows, but only within those reviews. So say you’ve read The Catcher in the Rye and seen The Wire, but haven’t yet read A Feast for Crows, you could just read the reviews for the first two and skip AFfC.

(Yes, I did get this idea from Liam, Head Phil. I hope he doesn’t mind.)

The Catcher in the Rye, by J.D. Salinger

Boy was I conflicted about this book. I really was. That’s the thing about these goddamn literary critics, they’re always saying this madman stuff about how this book changed their lives. That kills me, when they do that. It really does.

The most surprisingly part about this novel was Holden himself. I’d been told he was all angsty, and how he had all this insight into the phoniness of society and whatnot. But no one told me he was an idiot. He never said anything even somewhat intelligent, and really just spent the whole book doing one stupid thing after the other, never changing or learning from his mistakes. It was perhaps the most depressing book I’ve ever read.

I did however, like the prose. Over fifty years later, it’s still authentic and it perfectly gets you into Holden’s head. And clearly, J.D. Salinger had to have been doing something right, because I read the first 150 pages in one day, which is saying something, considering the only two emotions I could gather for Holden were annoyance and pity.

I was still hesitant on watching it, because even hardcore fans of the show said that it didn’t really get you hooked until around the third episode, and that made me raise an eyebrow or two. What good TV show, especially one considered to be the best ever, takes three full hours to get you interested? Despite my doubts, I decided to watch it anyway, prepared to fight through the initial boredom.

I don’t know if it was because my expectations were so low, but I loved the first episode, more than I love shrimp. I didn’t even care about the absence of Omar (who was my biggest reason for watching), I was so invested in the show I immediately watched the second episode afterwards. Then the third episode. And I finished the whole season within a week. It almost reminded me of Game of Thrones, but in an inner-city setting, with no fantasy elements. There were no black-and-white characters (hell, some of the policemen were worse than the criminals they were after), and all of them were more complex and authentic than those from any other cop show I’ve ever seen, and so when a character was in danger, the show managed to be as tense as a Breaking Bad episode.

My favorite character: Wallace, though not anymore. *cries* My second favorite would probably be Omar, then Bubbles, then Kima. I can go on and on. 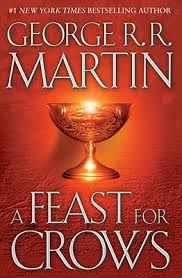 A Feast for Crows, by George R.R. Martin.

I expected to hate this so much more than I did. Because everyone in the ASoIaF seems to consider this to be the worst book in the series, which is probably true (I have yet to read A Dance with Dragons) but it wasn’t terrible. And the claims that “Nothing happened,” is complete nonsense. Important stuff happened in this book, especially in the last two hundred pages of so.

You also get to read from Cersei’s point of view, and she’s just as petty and crazy (and entertaining) as you’d expect her to be. Brienne’s chapters lagged at times, and were for the most part, pointless, but her final chapter may be one of the best in the whole series. Jaime continues on his way on the path of redemption, and it’s almost impossible for me to see him as the same man from the first book, he’s changed so much. Also, Sam meets up with Arya in a scene that I really wish lasted longer but was brilliant nonetheless. (That whole chapter was great.)

Sure, there were fewer major game changers than, say, A Storm of Swords, but I saw it as lots and lots of build-up. And judging from the little I’ve read of A Dance with Dragons, the next book will also be a lot of build up, and The Winds of Winter will hopefully have the same pace of the first three novels.

Also, I wished the Iron Islands storylines were only told from Asha Greyjoy’s perspective. Euron Damphair and Victarion were just all-around terrible people, and I think the storyline would’ve flowed better if it had been told from only one character’s perspective. It doesn’t hurt that Asha is the only somewhat likable character in the entire Greyjoy family.

Favorite character: Arya Stark, though I think she’d win for every ASoIaF book so far. Too bad she only had three chapters. It’s weird to think that the Starks, who were six of the eight POV characters in the first book, only got six chapters combined in this one. It’s depressing to think about.

A close second would be Sansa Stark. Knowing she wouldn’t appear in any more of the published books, I savored every moment we got from her perspective, knowing she may very well die, and even if she didn’t there was a good chance I wouldn’t get to read a Sansa chapter for a couple years.

Speaking of which, I hereby predict the fates of all the remaining Starks:

Jon: He’s in the highest position of power a bastard could ever hope for. So yeah, things probably aren’t going to end well for him. He’ll probably die via assassination. By Janos Slynt, would be my first guess.

Arya: I wouldn’t be surprised if she died in the end, and it would be tragic. I wouldn’t mind as long as it was in the very last book. I’m not kidding when I say that if she and Tyrion died and there were still over 500 pages left in the story, I would stop reading. So leave those two alone, Martin.

Sansa: She’s nice and safe now, as Littlefinger’s pawn. I wouldn’t be surprised if she ends up Queen of Westeros. Considering how she’s grown wiser without losing her compassion (yet), I think she’d make a good one, one day.

Bran: If he dies before he could make an impact on the main storyline, I will shake an angry fist in Martin’s general direction. He better survive until at least the final book.

Rickon: Who the hell is he?

3 thoughts on “Mini Reviews: The Catcher in the Rye, The Wire (Season 1) and A Feast for Crows”